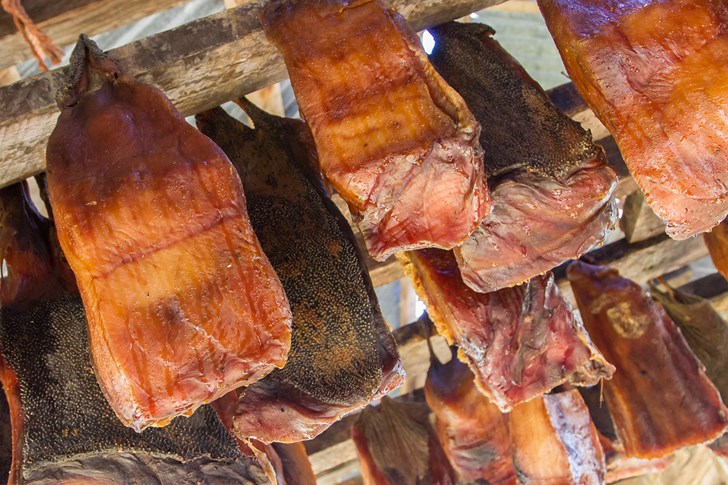 Traditional Icelandic Dishes You Have to Try

The best way to truly experience Icelandic culture is by sampling our food. Traditional Icelandic dishes are unique to the island, with few being found outside of the country. This is because their diet is heavily affected by their remote location, with the island being surrounded by the vast Atlantic Ocean. To help you work out the best parts of the native cuisine to try on your next trip to Iceland, we have compiled a list of dishes for you to add to your to-eat list.

Known locally as Hákarl, one of the most popular local delicacies is fermented shark, often served in small cubes. The dish is usually made from Greenland shark or other sleeper shark species and is fermented for four to five months. This gives the dish a strong ammonia smell and it is extremely fishy in taste. The overwhelming smell and taste are known to overwhelm people the first time they try it as it is a very acquired taste. Fermented shark is regularly stocked in two bars in Reykjavik, at The Icelandic Bar (Íslenski Barinn) and Café Loki. It is also readily available in many Icelandic shops and comes in two varieties -chewy or soft meat.

Another traditional Icelandic staple that you should make sure to try is the traditional spirit Brennivín, also referred to as Black Death. The spirit is often thrown back as a shot but has recently been used as a key ingredient in cocktails throughout Iceland. It is also consumed after eating a cube of Hákarl to wash the taste away. The traditional spirit is made using fermented grain, potato mash and caraway seeds, and has  been described as similar to Akvavit. The spirit is usually clear, but can sometimes be coloured too, and is typically bottled at 37.5 or 40% ABV.

Possibly the most unusual of the Icelandic dishes, Sheep Head is a traditional dish that many natives will have tried at least once. However, it is not as popular as it once was and you wouldn’t usually find it at your local restaurant in Iceland. Referred to in Iceland as Svið, you can still find it in Iceland at BSÍ bus station cafeteria, as part of a traditional Icelandic platter. Locals often swear that the cheeks are the tastiest part of the sheep’s head, but many people are put off by how it looks on the plate.

This is probably the most palatable of all traditional Icelandic dishes. The perfect snack for you if you like fish, it’s a particularly good dish to try if you are a pescatarian and haven’t tried jerky, as it has a very similar texture to traditional beef jerky. Known as Harðfiskur, Dried Fish Jerky is always available at local supermarkets, normally for a very affordable price. It can also sometimes be found as a bar snack around Iceland too, and is a popular snack among locals. Make sure you that you store the jerky in an airtight bag though, as the smell can often spread and contaminate other food.

These are just a few of the most popular traditional Icelandic dishes that you have to try, but there are plenty more. If you want to sample a wide range of traditional dishes, make sure you visit during Þorrablót, also known as the Icelandic midwinter festival. It is often compared to burns night in Scotland and there are large events held to celebrate it, with traditional foods available to try.